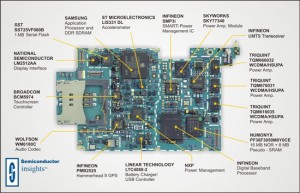 More news to fuel the Mac Fanboys and girls delight!

DigiTimes is reporting that Apple has placed a huge order for 100 million 8 GB (I’m guessing that’s GigaBit and not GigaByte) flash storage chips, mainly from Samsung, these will then be combined into larger capacities.

Check out that quantity people!

That’s twice the size of last year’s order and this hoarding could hurt competitors like Nokia and Sony.

These chips will go towards making 8, 16 and even 32GB iPhones and iPod Touch’s.

Apple will probably announce new flash-based handhelds, especially the iPhone and iPod Touch updates, most likely in June, which is only a coupla months away.

The number of chips ordered could point to either more iPhones, or the same amount of iPhones but with larger memories – or both!Â  🙂