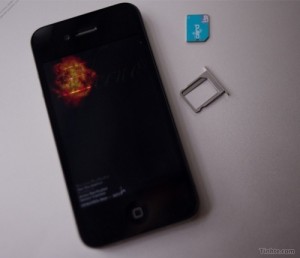 Dang! Apple is getting plenty leaky!

Leave one yet-to-be-announced iPhone in bar and have it sold can be a mistake. Have another one get in the hands of journalists in Vietnam – well, that’s just darned right careless!!

Yup – iPhone 4.0 has appeared in the wild again.

This iPhone 4.0 leak features a handset which, at first look, seems identical to the one which Gizmodo forked out $5,000 for – on closer inspection this one (apparently grabbed for $1k cheaper) has a few differences and answers that were previously unanswered.

This iPhone 4.0 has been cracked open to reveal an Apple branded chip. After enhancing the image, the chip is tagged:

Which is the same as the processor in the iPad 🙂

There is one noticeable physical difference between this iPhone 4.0 leak and the previous sightings of the new iPhone: two screws that were previously at the bottom of the handset have now disappeared. Other external tweaks show that this one is definitely a more polished version when compared to the one lost in California. The silkscreening seems final, showing 16GB where the Cali one just showed X’s. The screen looks really good and sharp and seems a higher resolution than the current generation – I’m expecting iPad quality.

The source of this iPhone 4.0 leak is apparently via an Asian businessman on a trip to the US. So, head over to the states as it seems you can grab an iPhone 4.0 on most streets.