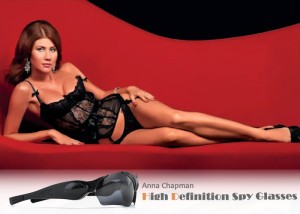 Well, after being uncovered (literally if you’re a reader of Maxim and such), instead of keeping a low profile “Russia’s most glamorous secret agent” has instead been very busy in most areas of the media – there are even rumours that she may run for parliament after being appointed to the public council of the Young Guard of United Russia, Vladimir Putin’s political party.

She’s no stranger to tech (I should imagine) and now she’s also given her name to some spy glasses from Chinavision.

Chinavision may not be the sexiest company out there but the Anna Chapman High Definition Glasses have 4GB of storage, a Micro USB port and a 5MP sensor which can record video in 1280 Ã— 720 @ 30fps.

You can store up to 2 hours of secret spy video in these spy specs but will probably not be able to lead you into your favourite James Bond fantasies I’m afraid.

The Anna Chapman glasses will cost you Â£70 with discounts if you decide to kit out your entire spy network – perhaps charge it to the government account? 😉