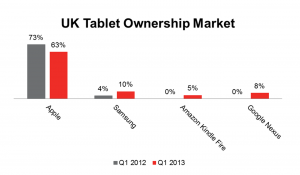 Is the UK falling out of love with Apple’s iPad? Well, according to the latest figures from YouGov, it’s certainly starting to look like it.

As tablets now outsell desktop computers and will soon be threatening laptops, it’s interesting to see that the recent report from YouGov demonstrates just how the top-end Android tablets are taking chunks out of Apple’s pie. Click the chart to make it bigger.

In the first three months of 2012, 73% of Brits buying tablets opted for an Apple-flavoured slate. A year later, where Apple is still dominant, the number has fallen to 63%. Samsung, Amazon, and Google are all refusing to let the Cupertino giant have it all its own way.

In these cases, the zeroes reflect a very small number of people, rather than no one in the UK at all.

According to the poll, we Brits rate Samsung’s Galaxy range of products equal to the iPad in terms of quality, with the exception of the iPad mini. The mini is stealing our hearts, earning a 4% market share just a few months after launch. It was also awarded the highest satisfaction score overall, as well as in eight out of the nine quality attributes.

Google’s Nexus 7 has been held in high regard by both tech reviewers and consumers alike.

Slate ownership is up across the board, with 18% of UK adults toting a tablet. That’s more than 8 million of us. That’s a huge increase, given that last year the number was just 5%.

Add to the recent figures saying more people use BBC iPlayer on a tablet than a smart phone, and it’s clear us Brits are addicted to bigger portable devices.

John Gilbert, the consulting director of YouGov technology and telecoms, said in a statement that it wasn’t just cheaper competitors stealing Apple’s thunder. “It seems that Apple no longer has a monopoly on the ‘premium’ share as other brands emerge with near-equal satisfaction scores. Given the market’s current expectations and considerations in purchasing tablets, we anticipate Apple to lose additional share throughout the coming year to Samsung, Google and Amazon.”

I wonder if the rumoured 7-inch version of the Surface, or HTC’s Windows 8 tablet will make a dent in Apple’s share?