Android owns 81% of smartphone market with Samsung outselling everyone 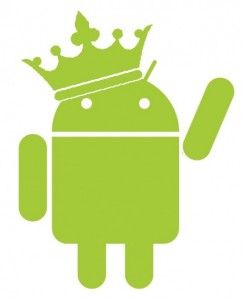 Not only has Google’s new Nexus 5 gotten off to a flying start but its Android mobile operating system accounted for 81.3% of the market at the end of the last quarter.

The 81.3% market share owned by Google is an increase from the 75% recorded at the same time last year. The report was conducted and released by Strategy Analytics.

Apple saw its market share continue to slide, despite growing sales. It fell from 15.6% in 2012 to 13.4%. It was noted that Apple usually struggles in this quarter as demand drops ahead of the launch of its next generation smartphones.

“Apple also lost some ground to Android because of its limited presence at the lower end of the smartphone market,” Strategy Analytics senior analyst Scott Bicheno said in a statement. “Android will need to take further shipments from Apple if it wants to keep growing in the future, but this is unlikely in the near term as the new iPhone 5s model is proving popular and it will help Apple to regain volumes worldwide in the fourth quarter of 2013.”

“Microsoft’s growth is almost entirely due to Nokia and its steadily improving Lumia portfolio across Europe, Asia, and the United States,” Strategy Analytics executive director Neil Mawston said in a statement. “However, Microsoft is clearly still at a low level of share worldwide and it is struggling to gain serious traction in several major markets like Japan, South Korea, and Africa.”

The worst news is reserved for BlackBerry though. Its marketshare plummeted to just 1% during the third quarter, from 4.3% the previous year.

Strategy Analytics blamed the weak BB10 line up for its poor sales.

Top of the heap, according to the latest findings from ABI Research’s investigation into the state of the smartphone market, is Samsung as it shows that the Korean giant ships more phones around the world than all of its major competitors combined.

Microsoft had quite a good run too as it managed to ship twice the number of smartphones as BlackBerry last quarter, and recording a 165% year-on-year increase. The big M owes all of that to Nokia, which accounted for 95% cent of Windows Phone unit shipments.