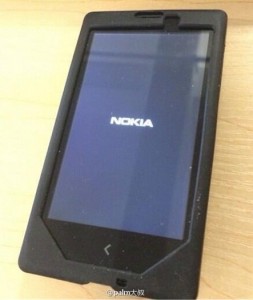 Recent weeks have seen leaked renders appear of Normandy, the Android-powered smartphone Nokia is said to have developed as a side-project to its Windows Phone focus. The intrigue continues with the first photo of the phone.

The sneaky pic of this prototype was originally posted to Sina Weibo, as you can see from the watermark.

The image shows it booting up in a case which covers up the body so not much to report there, but you can see the button below the LCD display which falls in line with the press images that have hit the webosphere already.

There’s obviously no official specs just yet but the new Nok Normandy is said to include a Qualcomm Snapdragon 200 SoC, 4-inch FWVGA display, 5MP camera, and Android 4.4.1 KitKat.

This low-cost smartphone is scheduled for a launch during MWC 2014 next month in Barcelona.

It might not be a flagship model but it’s a Nokia and on Android!