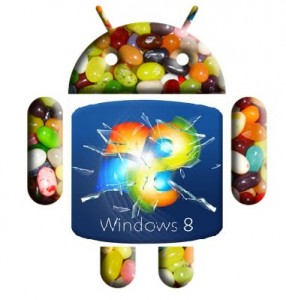 Windows and Android joining ranks in order to squash iOS? This could be one of the major coups of 2012!

It seems that whatever Microsoft and Google do with their operating systems Apple is always one step ahead. But, this could all change very soon.

According to reports it sounds like Google is pushing the development of Android 5.0, Jellybean, so that it can land in time to forge a partnership with Microsoft.

This is so unforeseen I couldn’t possibly be making it up!

It seems that Android 4.0 has yet to fulfill its potential as there’s not that many tablets rocking Ice Cream Sandwich as was hoped.

Google wants to get Jellybean out in time for the summer and have it geared more towards tablet computing.

The plans would be to include a more complete version of Google Chrome as well as the ability to dual-boot.

The big deal is that manufacturers will be able to make tablets that can switch between Android 5.0 and Windows 8 at the flick of a switch without having to turn the slate off.

This is a very canny move on Google’s part as Windows 8 has been designed with touchscreens much in mind and would be in direct competition with Android. The best way to avoid competition is to go in to partnership.

Having a friend in Microsoft could prove to be a stroke of genius as not only would the two heavyweights be taking on the common enemy but a device with access to Android apps and proper PC functionality will certainly be an attractive proposition – wouldn’t it?