Android 5.0 Jellybean to give all Google Phones Webtop Powers 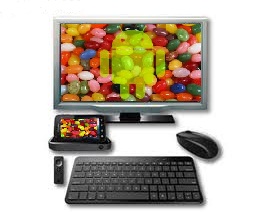 Even though Android 3.0 (Honeycomb) was built to be tablet-friendly it seems that it was a quick-fix for Google due to overwhelming demand. Google’s next operating system, Android 5.0 (Jellybean) will have all the features that Honeycomb should’ve had – including with the ability to swap from mobile to PC OS at the flick of a switch.

Even though the news that Jellybean will have the super-powers of being able to switch from Webtop to mobile is still classed as a rumour, it does come from a well-renowned source.

Eldar Murtazin, a trusted industry insider, claims that all Android 5.0 handsets will possess similar skills as the Motorola Atrix.

So, expect your Android 5.0 phone to be all mild-mannered but accomplished in its role as a mobile but, when docked into a lapdock or monitor, it will suddenly switch to a more Chrome-style super-hero experience! Ka-POW!

Even though the Motorola Atrix didn’t exactly set the world alight, there is a market nestled nicely between the new Android 4.0 smartphones and those convertible tablet hybrids such as the Asus Transformer Prime.

This may prove to be a good move by Google as not only will it capitalise on bringing the Chrome browser to Android, but having this capability across its entire range of devices would no doubt be attractive to users.

It may even bring in the business user market as their work phone can be switched over to Chrome mode so no need to dish out a laptop and phone – just a phone and a lapdock.

Add that with the fact that most of the newly released Android blowers to be packing  quad-core chips in their engine rooms I should expect these to offer a slicker PC experience on Jellybean than that seen on the Atrix.

What do you think? Good move or just more confusion over Android operating systems?