Android @ Home and Google Tungsten – Your Home is an Accessory 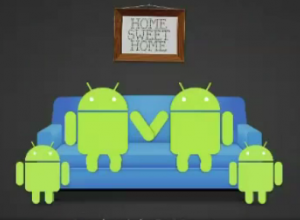 Home automation is soon going to be Android flavoured is Google has anything to do with it and every room will become a media streamer!

Android @ Home is built around a series of open source libraries which developers will be able to use to create home automation apps to be used on the Android platform. Any device plugged into an Android @ Home receiver will work with Android’s automation API’s.

That means that if you’ve gone to crash on your bed but left your 75-inch 3D TV on in the living room you’d be able to tap your Android device’s screen and turn the monster goggle box off right there, from your pit.

The thing that I really liked the sound of is Google Tungsten. Tungsten hooks the Android @ Home framework with the cloud-based Google Music. This all adds up to being a rather natty system of audio streamers not unlike the Sonos system or the Apple fan’s Airplay-enabled devices.

At Google IO they demoed this by showing a little glowing box which was hooked up to speakers. Using an Android phone or tablet you’d be able to sling your music from the cloud to any of these mysterious music machines. In theory you could have one in every room playing different music which is pretty cool.

Yeah – there’s already music zone players and things like the Sonos which does have its own app so you can use your phone or puter but the thing is that Android @ Home works these ideas the other way around. Instead of cobbling an app together they’re making everything in your home accessories to your smartphone – welcome to the Google Android Smarthome.