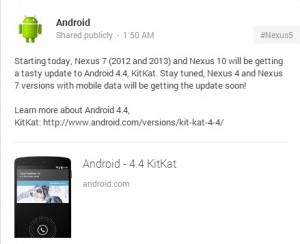 Google’s flagship tablets are to start updating to its latest Android 4.4 KitKat operating system today, the company has announced.

The 10-inch Nexus 10 and both 2012 and 2013 Wi-Fi models of the 7-inch Nexus 7 will receive the update “starting today”, according to the official Android Google+ page.

If you have a Nexus 7 with 3G or 4G, you’ll be waiting a little longer for the four-fingered upgrade, as will Nexus 4 owners. You lot will be “getting the update soon”, Google promises.

HTC has said its lovely award winning smartphone, the One, will be updated to Android 4.4 in January, with its developer-friendly Google Edition receiving it later this month.

Samsung has said it will announce updates “in due course”.

Google has designed KitKat with low-powered devices in mind, with it running on gadgets with as little as 512MB RAM, so even entry-level phones should be able to handle the update. Which is nice.

KitKat puts a Google search bar at the top of every page and you start with just three pages, namely your home page, a dedicated Google Now page to the left (rather like HTC’s Blinkfeed) and a Google Play widget to the right. New pages are added further to the right.

What might take some getting used to, however, is that your text app will be replaced by Google Hangouts by default, which means all your Gchat IMs from all your accounts are in the same place.

Thankfully, being Android you can change pretty much everything if you tinker enough, so you can just install a new text app and set that to default if the new way isn’t to your liking 😉