Amazon Tablet will Target iPad and Cost MUCH Less 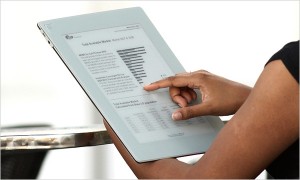 If recent rumours end up being true then Apple’s iPad may have some serious competition which will undercut the fruity tablet by £100s!

Imagine having a tablet that is supported by Amazon’s infrastructure and only costing $99.

Well, that’s what is being said in the New York Post and, if everything pans out as normal, this points to the Amazon Tablet costing £99 over here and undercutting the iPad by around £300! Dang!

Other tasty tidbits include that the Amazon Tablet will be thin and be plugged into the social side of things seeing as Amazon has registered the urls kindleair.com, kindlescribe.com, and kindlesocialnetwork.com.

Yeah, about that and/or scenario. Some folks are saying that there could be up to three new Amazon devices: A colour Kindle running Android to taunt the Nook has been mentioned as well as the full-size Android tablet that’ll compete directly with the iPad – there’s also murmurs about a refreshed standard Kindle.

Screen sizes have varied between 7- and 9-inches and whispers of a dual-core Tegra 2 processor or a quad-core Nvidia Kal-El engine under the hood.