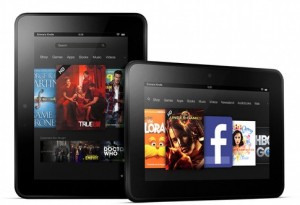 It appears that a lot of you were waiting to see what the Apple iPad Mini had to offer and then decided to buy a Kindle Fire.

Apple’s launch of the iPad Mini seems to have had a remarkable effect on the tablet market – but perhaps not the one they were expecting.

Amazon’s Kindle Fire HD actually had its biggest day of sales in America since its launch on the day after the iPad Mini was announced.

Amazon stated: “Wednesday was the $199 Kindle Fire HD’s biggest day of sales since launch and up 3x week over week”

The $199 Kindle Fire HD translates to the £159 16GB Wi-Fi version with special offers here in the UK.

It seems that instead of killing off the Kindle Fire HD and Nexus 7, the iPad Mini may have inadvertently highlighted their strong points – one of which must surely be their price.

Unfortunatley, the new Android hardware won’t be unveiled tomorrow thanks to Hurricane Sandy, but you could win a Kindle Fire in our GadgetyNews competition!

Did you wait to see what Apple were up to before buying an Amazon Kindle Fire or Nexus 7?