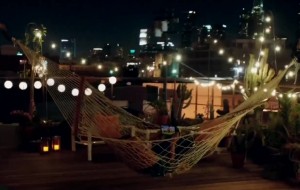 Amazon is due to announce some new Kindles later today and it seems that they want us all to be sure of what to expect as they’ve just done a show-and-tell teaser on US TV.

The teaser appears to show a larger Kindle Fire tablet and a Kindle eBook reader with backlighting.

The advert was shown on a US TV station during an American football match and near the end of the clip you can see a lady chilling in a hammock and using a tablet that appears to be much bigger than the 7-inch Kindle Fire currently on sale in the States. Hello Kindle Fire 2?

The Kindle Fire has yet to touch down here in the UK but rumours are rife that Amazon is planning a UK launch and it makes sense for it to do it sooner rather than later as the Google Nexus 7 is enjoying a hefty marketshare here right now, and rightly so too!

Before the hammock scene there’s sighting of what at first appears to be a standard touchscreen Kindle eBook reader, but unlike the existing models, it looks to have a bright white background rather than the current grey.

Are we witnessing a backlit Kindle?

Where a backlight would be great to read in gloomy conditions isn’t the whole point of the usual grey background is that it’s easy on the eye and as comfortable to read as old-school print?

Not long to wait and see though 🙂