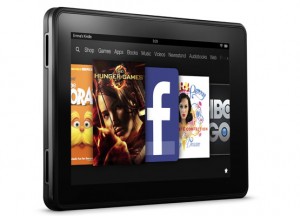 Amazon stepped up its fight with Apple and unveiled a new set of Kindle Fire tablets including some designed to compete with the iPad. The best news for UK is that they’re heading over here too!

In a former airplane hangar in Santa Monica, California, Amazon boss Jeff Bezos unleashed 3 brand-new Kindle’s; ranging from an all-new Paperwhite E-reader to the new Kindle Fire HD which will be pitted against Apple’s all-conquering iPad.

Naturally, Amazon has an eye on Apple but the slate of new products will also compete with rival devices from Google, Microsoft and bookseller Barnes & Noble.

The first product to be unveiled was the Kindle Paperwhite. The new and improved E-reader boasts a screen which has 62% more pixels and, thanks to the new screen, it is capable of 25% more contrast than its predecessor.

“Thinner than a magazine, lighter than a paperback“. Paperwhite, priced at $119, is lit from above rather than from the back, which, according to Bezos, made it “perfect in direct sunlight” 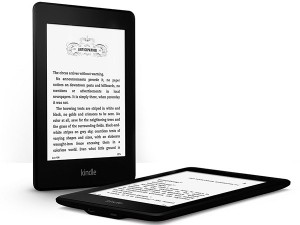 The Kindle Paperwhite still keeps an impressive battery life when using the front light technology and can last up to 8 weeks from a single charge.

New software features designed to enhance the reading experience include ‘Time to Read,’ which gives you estimates of how long it’ll take you to finish a book, or the chapter you’re on. ‘X-Ray’ helps you learn more about the characters in a book. You can also purchase books directly from author biography pages now.

Paperwhite starts shipping on 1 October in the US, and will also be available in the UK. The 3G connected version will cost $179

The main tablet announcement, of course, was the company’s new Kindle Fire HD.

The new product will have two wi-fi channels for faster transfers.

The power plant is a 1.2GHz dual-core processor which is coupled with the Imagination PowerVR 3D graphics chip, both of which should make the Fire HD a nimble game player.

The Kindle Fire HD is available in 16GB and 32GB flavours in both screen sizes.

There’s a front-facing camera, dual Wi-Fi antennas for better and faster connectivity and Dolby Surround sound thanks to a pair of speakers. There’s also a HDMI port so you can hook the Fire up to your HD telly.

There will also be a premium version which will come with 4G support. It’s not expected to ship until November 20th and, crucially, will only be available state-side as the UK hasn’t got the necessary 4G chops yet.

The Kindle Fire has captured 22% of tablet sales in the US in the nine months since it went on sale last November and has been the company’s top-selling product since launch, Amazon said last week.

As impressive as that is, it still leaves Amazon trailing far behind Apple’s far more powerful iPad devices which accounted for 68% of global tablet shipments in the second quarter, compared with Amazon’s 5%, according to research firm IDC.

Apple is said to be planning an iPad Mini so that it can muscle in on the smaller, cheaper tablets. Amazon’s response is said to be the launch of its own mobile device that would compete with Apple’s iPhone.