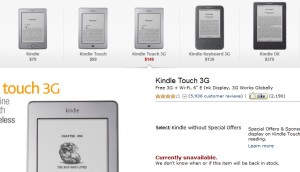 Could Amazon be following Apple in preparation of a new Kindle? It appears that one model of the Kindle family has been removed from Amazon’s US site – is there a replacement on the way?

If you head over to Amazon.com you may notice the distinct lack of availability of their Kindle Touch 3G – (it’s still available at the UK store – for now)

This has been the catalyst for rumours of the online retail giant preparing to ‘do an Apple’ and refresh its line-up of ebook readers.

Not only is the Kindle Touch 3G listed as being currently unavailable, there’s also a shipping delay on the Wi-Fi-only Kindle Touch.

This could just be put down to shortages, you may counter – but Amazon has also slashed the price of the Kindle DX by 29% as well.

Apple does similar ahead of a new iPhone landing – getting rid of current stock to make room for the new model.

Originally I thought that the discounts could be a preemptive strike on Google’s Nexus 7 tablet but I reckon everything is pointing to a new Kindle.