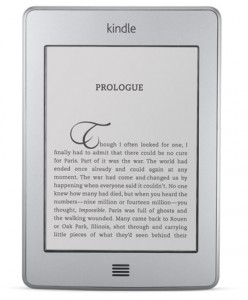 Welcome a pair of new Kindle siblings to the ever popular e-Reader family – named Kindle Touch and Touch 3G.

The Kindle Touch and Touch 3G are 6-inch screened, buttonless devices which are both smaller and lighter than the current third-generation Kindle.

You will notice that the exterior has had some new treatment with the Touch and Touch 3G now sporting rather slick silver togs.

Page turns are now controlled by tapping the screen seeing as there’s no buttons. So: tap on the left of the screen to go back, and tap on the right to go forward. Amazon has dubbed this their “easy reach” system – in case you were wondering 😉

After working in Medical Imaging for more than a decade it’s the new X-Ray feature which had me intrigued.

Instead of getting views of your insides this X-ray will hand you facts about what’s happening in the book when you tap on a word. For example, during the live demo, tapping on ‘Versailles Treaty’ pulled up a Wikipedia entry. You can expect speedy info deliverance, too, as Amazon will have already figured out what’s relevant to your book and pulls in the necessary info along with the book before you’ve even made it past the first page.

Both are packing 4GB of internal memory, that’s 3,000 books worth, with a claimed two months battery life when the wireless is switched off and six weeks with it left on.

If you want to be connected when out and about then the 3G version has an asking price of US$150, compared to US$100 for the Wi-Fi only version.

They can be used in over 100 countries, with no annual contract or monthly fee to tie you down. In the words of Jeff: “It’s free 3G wireless”… for a one off US$50 fee for lifetime wireless data.

Pre-orders for the US start today and shipping commences on 21st November. Word is that they’ll be over here soon after their October UK release.