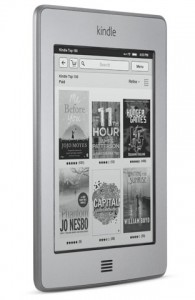 Amazon has announced that it will be launching the Kindle Touch and Kindle Touch 3G in the UK – only a year after the touchscreen e-book readers appeared in the US.

The Kindle Touch was released in September in the States along with the Kindle Fire (another Kindle we have yet to get although an “early 2012” release has been rumoured) and went global (except the UK) last month. Now, finally, the new UK models have been given their due date.

The UK Touch and Touch 3G will be identical to the US versions, but will feature some software tweaks and bug fixes before an official update hits in the near future.

“UK customers have been asking us to make Kindle Touch available on Amazon.co.uk and we are excited to do so today,” said Jorrit Van der Meulen, vice-president of the company’s Kindle division in Europe.

If you want a purely touchscreen e-Reading experience you can pre-order one from Amazon.co.uk

right now or you could wait until they go on sale in the UK on 27 April.

The Kindle 3G connectivity will be powered by Vodafone in the UK and doesn’t need a contract because Amazon has factored the cost of using the network into its sale prices. Nice touch. Or, should that be Touch? 😉

, the Kindle Touch features the same 6-inch screen. The Touch weighs in at just 213g, with the Kindle Touch 3G tipping the scales at 220g. Both promise two months of battery from a single charge.

The new models also feature Amazon’s X-Ray. Unfortunately it’s not a modern version of those glasses that you always wanted to order from the back of a comic.

X-Ray allows you to see all the passages across a book that mention ideas, fictional characters, historical figures, places or topics of interest, as well as more detailed descriptions from Wikipedia.

You going to be Touched?