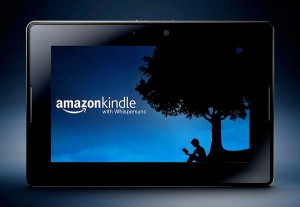 You lovely GadgetyNews readers will already be aware that Amazon will unleash a tablet with an official announcement expected tomorrow but it now sounds as though they’ll release not one but three of the little blighters!

The Amazon slates named Hollywood, Coyote and Kindle Colour are expected to be launched at the New York bash on Wednesday September 28th but now TechCrunch has news and details of the Amazon Kindle Fire tablet.

The Kindle Fire sounds like it’s taken the BlackBerry Playbook and added some Amazon magic.

The tablet is loaded with a 7-inch screen and will run Amazon’s customised version of Android complete with its own Android app market.

The Amazon Android app store will have a variety of goodies as well as the Kindle app (naturally) on show and, after striking a deal with Fox, will include steaming movies and TV shows.

We will all find out for sure tomorrow but the Amazon tablets are said to land on US shelves mid-November and apparently it takes a few months to travel the Atlantic as we Brits wont see them til 2012.