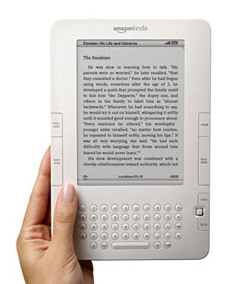 That’s almost half a century in tech years.

But that’s how long it’s taken for Amazon to spring their eBook reader over to the UK.

Yup – it sounds like we might finally be graced by the presence of Kindle 2 – but do we need it now?

The Bookseller has been tipped the wink from an anonymous source that Amazon will make the announcement next week, having tied up a raft of non-disclosure agreements with publishers.

Let’s face it – an announcement isn’t the same as product on shelf is it? With less than 2 months before Santa drops shiny tech in our gadgety stockings Amazon is cutting it fine to say they’ve had a coupla years to plan it 😉

Why has it taken all this time? Well it’s apparently down to mobile network protocols, which differ between the US and Europe. According to the Bookseller again, ‘key things’ have now been tied up.

Qualcomm is reportedly working on providing the UK Kindleâ€™s wireless service, which allows users to download ebooks, magazines and newspapers from pretty much anywhere.

Could this be too late for the Amazon slab? We have the lovely Apple iTablet and Microsoft Courier on the horizon that will be able to handle simple eBook stuff and a whole lot more.

What would your choice be?