Amazon Kindle 2 Shot In The Wild 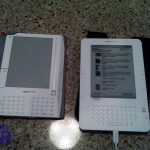 Well Amazon has tried to quiet the next gen Kindle rumours but GBR has something that will be more difficult to refute.

As you are probably aware there has been lots of talk about a pair of totally new Kindles.

Not so much as totally new but more along revised this device appears to address the initial complaints over the original’s look by rounding the corners and ditching the odd (I thought cool) angles; the scroll wheel has been replaced with a joystick, the SD slot is gone (don’t worry, there’s at least a gig and a half on-board), and around back, we have grills that seem to suggest integrated stereo speakers.

The display is basically the same size and still isn’t colour.

So, if the sharp edges on the first-gen were a turn-off then there may be light at the end of the Kindle-shaped tunnel.

If you’re looking for an upgrade – I’d hold on to your cash.

Thing is, was ditching the scroll wheel and that funky mirrored bar for a joystick really the right way to go?