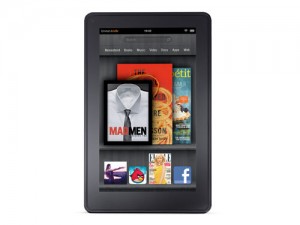 What you get with the Fire is a 7-inch IPS gorilla glass screen which displays 16million colours with a dual-core processor under the hood.

Before you point and laugh at the fact it’s running Android 2.1 I’d wager that you’d be hard pushed to even recognise it as a Google-powered tablet.

You see, Amazon has tweaked the Android OS so much that it could change its name and live another life without anyone suspecting a thing.

For instance, gone is Android Market in favour of an Amazon-centric store built around Amazon Cloud Player and  their Cloud Drive. There’s a neat Cover Flow-esque interface which features a virtual shelf view for your most read and watched content. If you, like me, prefer some pictures with your words then you’ll be glad to know that you’ll also be able to browse full colour magazines.

The Fire even gets an all new web browser called ‘Silk’.

Silk has a few neat touches too. The Amazon browser can actually process web pages in the cloud for a faster browsing experience and Silk can even learn your browsing patterns and pre-load the pages you read the most. So careful where you spend your time 😉

Obviously Amazon is aware that the link with their online store is going to be a handy and lucrative association with the Kindle Fire and so have included a tablet-optimised shopping app to make your Amazon shopping sprees easier – they even hand you Amazon Prime, the MP3 store with over 17 million songs and its Prime Instant Video streaming service for 100,000 advert-free movies and shows all for nowt (as they say up north). That’s free in case you’re looking at BableFish to translate Yorkshire into English 😉

Amazon says it’s investing  hundreds of millions of dollars in order to license content and by partnering up with the likes of CBS, NBC Universal and Fox the Fire is certainly shaping up as a kick-ass entertainment device.

That ready and waiting catalogue of books, movies and music surely must surely put Amazon’s Kindle Fire in the best position to be crowned the favourite non-Apple tablet – could this actually be that much whispered about iPad killer?

Not according to Gartner analyst Michael Gartenberg: “I don’t think this is really an iPad competitor,” he went on to say that “This isn’t an iPad-killer. The Kindle Fire can be very successful without killing anything.”

The specs of the Kindle Fire might not get pulses running with only 8GB of internal storage, no microphone or camera and being a Wi-Fi only device but then Amazon have played their hand rather well.

Amazon looks to combat the connectivity with its Whispersync feature which synchronises content across all your devices. This includes movies and TV shows – that means you’ll be able to switch to the big screen when you’ve had enough of tablet viewing and your movie will be at the exact point you left off.

Free Amazon Cloud Storage was the clever alternative to cramming more flash memory into the Fire.

Naturally the Kindle Fire is completely compatible with Facebook and Twitter so all is fine on the social networking addiction.

Amazon’s Kindle Fire is US-only at launch and its list of features isn’t really going to rival the iPad’s. Then you take into consideration the Fire’s US$200 price tag and I reckon that Amazon will reach consumers who want some of the media capabilities of the iPad but see the $500+ asking price of the Apple tablet a bit scary.

The Amazon Kindle Fire is released into the wild on 15th November in the US and is available for pre-order now. There’s no word on UK pricing and availability but you’ll get to know as soon as I do 🙂