Amazon to announce Kindle Fire 2 next month – perhaps with smartphone 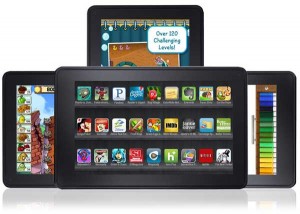 September is looking like an early Christmas judging by the tech landing during the ninth month. The latest bit of shiny, gadgety lovliness to be added to the list is Amazon’s newest version of the Kindle Fire.

Not only is Microsoft going to unveil the first wave of handsets for its Windows Phone 8 operating system, Nintendo will be announcing release details of its Wii U game console, Apple is, of course, going to unveil their new iPhone 5 and now there’s news that Amazon is inviting the world’s top tech journalists to a airport hanger in Santa Monica where they expect the Kindle Fire 2 will be unveiled on September 6.

The Kindle Fire has done more than Amazon could have wished for.

It was aimed squarely at the budget tablet market as a loss-leader for the online retailer who hoped to recoup the money through the Kindle Fire’s easy link to the Amazon store.

This it did remarkably well – so well, in fact, that it has gone on to take a bite out of Apple’s marketshare in the US. The tech media are all betting that Amazon wants to take this success global.

That’s not all. The Fire is based on Android but runs on a stripped down version of the Google OS which actually outsold Google’s own Honeycomb offerings – and subsequently inspired Google to go after the same market with their recently launched Nexus 7 tablet.

Equipped with Amazon’s Prime subscription US users have been enjoying all-you-can-eat media consumption via Amazon’s selection of TV shows, games, films and books for a flat-rate monthly fee.

This is the main reason for the delayed global release as Amazon has get the same media deals in place worldwide for it to be able to repeat its stateside success.

It’s thought that Amazon could release two new versions of Kindle Fire; the first would be an improvement on the current 7-inch model, with rumours also suggesting that the online market-trader might be preparing a 10-inch version too – just like the original iPad.

The 10-inch version could be kitted out with a quad-core processor, whilst both have been rumoured to feature a new ergonomic design and better build quality.

As well as the Fire taking centre-stage at this press party it is thought that the original Kindle will see its annual cosmetic overhaul being shown off too.

The Kindle reader was outed last week after it passed its FFC testing. Nothing is known about the changes – but don’t expect it to be drastically different to the 2011 revision.

There is an outside bet that Amazon may also drop the bombshell that they are entering the smartphone market! Could the Amafone a worthy contender to the iPhone and the Samsung Galaxy S III?