Altek Leo – 14 Megapixels and 3x Zoom in a Touchscreen Cameraphone! 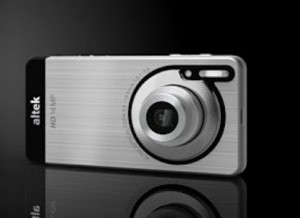 After writing about Panasonic’s Lumix cameraphone I decided to have a poke around the interwebs – as you do.

What I found was something that could already be waiting in the wings to knock the 13.2 megapixel Panasonic off its yet-to-be-released perch!

Altek (yeah – I don’t know either) is currently feeling all smug about their Leo.

The Altek Leo is a 14MP sensor-packing android phone which is also sporting a 3x optical zoom and Xenon flash.

Where I am unsure if the Panasonic Lumix Phone will reach Europe – Altek says that the Leo is coming this way early next year!

Apparently the Leo also manages to record 720p HD video which can be lit with its LED video light.

The Altek Leo is well connected with Wi-Fi, Bluetooth, GPS and 3G on-board and boasts the now ubiquitous accelerometer and digital compass.

There’s also a microSD card slot for pumping up the memory.

The Altek Leo leans heavily on its camera smarts and features a separate camera power button so that you can quickly switch it to camera mode without having to scroll through the usual mobile phone menu. You also get blink and smile detection and a suite of photo editing functions baked in.

All that is navigated via the 3.2â€, WVGA-resolution, multi-touch screen.

This all sounds rather promising and the device itself looks quite tasty in the pics – the oddness starts when you notice that it will be loaded with Android 2.1. Hmmm….

Android 2.2 is out and by the time Leo strokes its mane in public Android 3.0 Gingerbread should be out.