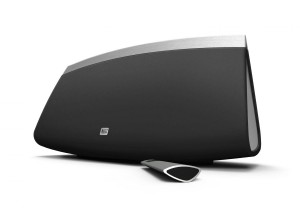 Altec Lansing knows a thing or two about audio – they designed the sound systems at Abbey Road and Woodstock for a start and they also produced the first iPod dock. They now reckon it’s time that their dock is back on top of the heap – meet the inAir 5000.

The B&W Zeppelin has had its own way pretty much since its release snatching awards for both sound and design and as it has added AirPlay to its long list of can dos then the Altec Lansing inAir 5000 has quite an act to follow.

The inAir 5000 looks classy and much less obtrusive than the AeroSystem One from Jarre. The Altec Lansing soundchucker is encased in black and matte-metal and is also AirPlay compatible.

The sleek shape is to house much cleverness inside. You see AL has designed the inAir 5000 to radiate sound out at a range of angles to ensure that no sound waves are cancelled out by your homes clutter and even the systems speakers themselves.

There’s a USB port round back which will also charge your iDevice as well as allowing you to hardwire your music player should AirPlay not be being used.