AlessiTab – Even Stylish Kitchenware Purveyors Want in on the Tablet PC Market! 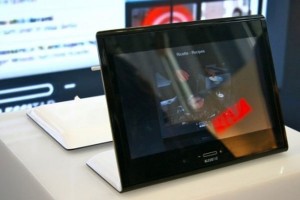 Alessi – yup, the Italian company that are better known for making kitchen appliances has also joined in on the tablet action!

The AlessiTab is a tablet PC that runs Googleâ€™s Android OS and, so as not to appear to be straying too far from housewares, this tablet is designed to be used around the home and comes with a pretty cool-looking dock/stand thing.

As well as recipes (well, it is an Alessi) it’s also shown playing digital TV and seems to have a retractable aerial.

As per usual with things like this there arenâ€™t that many details of what’d under the AlessiTab’s hood.

What is known though is that it will feature a battery which will keep the Tab powered for up to six hours usage and that the tablet will be launched in Europe this September.

You can see in the video below that it will come with an SD card slot and a USB port – Hopefully it will rock the latest version of Android when it appears for an asking price of around 300 Euros.