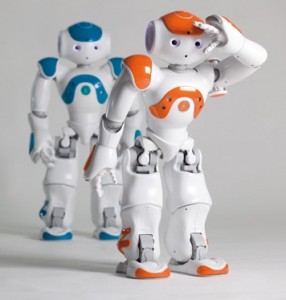 Who doesn’t love robots? Well, Aldebaran Robotics has unveiled the latest version of Nao. Don’t let its toy-like exterior fool you – this is a serious bit of kit but is also totally adorable.

Nao has been designed to be used for research and teaching – specifically, to help “serve organisations that care for autistic children and those losing their autonomy.”

That’s a pretty serious challenge for the little fella. That said, Nao comes packing some tasty new gear. The Nao upgrade includes a 1.6GHz Intel Atom chip, twin HD video cameras and Nuance voice recognition software. A ‘word spotting’ feature enables the Nao Next Gen to recognise specific words within a sentence – that’s more than some of my friends can manage on a Friday night! Told you it was clever.

Nao is also faster and so stands a better chance of keeping up with its human buddies – but running brings its own dangers in a busy environment – namely being knocked to the ground (you ever tried getting on/off a London tube in rush hour?). To this end, Nao has been handed a cool new walking algorithm that enables it to recognise when it’s about to fall over and shield itself from damage, dust itself down and get back on its feet.

Just check out the video below and try not to want one!