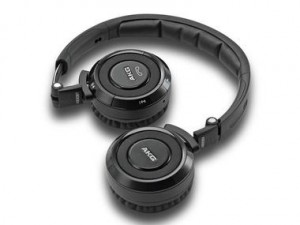 I make no bones about liking my AKG K450 headphones – it has got to a point where at least two fellow commuters that catch the same morning train as me now wear them and half of my team mates at the day job are also proud owners.

So, when I was offered a chance to review the Bluetooth equipped AKG K830BT cans, how could I possibly decline? But does a lack of cable affect performance? Does having controls on your ear make sense? Read on gadgety faithful; read on.

If you are unfamiliar with AKG, the Austrian brand is now part of the Harman International Group – which makes earpleasing companies such as Harman Kardon and JBL their stablemates. Yes, these people are passionate about sound.

The overall silhouette of the K830BTs are very similar to the K450 in that they are both compact on-ear headphones. You have soft cloth earcups coated in vinyl which sit on top of your ears. These are not the lug sauna over-ear type.

As I have worn the K450s for quite a while the K830BTs felt like putting on some comfortable slippers. OK, special ear-slippers.

I wear glasses, have long hair and cover great distances on foot and I have had no problems with the AKGs pinching, slipping or have any other such complaint. OK, so I wouldn’t say that these would put up with jogging, running and such but walking, working, traveling on the bus, tube or by bike I’d say these would hang on.

There is a small panel on the inside of the headband which does sometimes help itself to a hair or two but hey – I’ve got plenty :p

The padding on the earpieces and on the arch of the headband is soft and feel quality. The adjustable band and the 180-degree swiveling earcups should ensure most head shapes and sizes are catered for – unless you’re called Shrek, Medusa or Thing.

I have tested Bluetooth earphones and headphones and noticed a lack of bass, not so with these. Don’t go expecting the bass-heavy sonics of Dre’s Beats – AKG has been building products for professional, as well as private, users for over 60 years and you will find their mics and other bits in professional studios so what you get is clarity and faithfulness to the original mix.

The K830BT is equipped with neodymium magnet powered speakers which serve a very convincing reproduction of what the sound engineers and producers of the music you are enjoying had in mind.

Playback has a good balanced range with no particular channel fighting the others for dominance. Because of this, the AKGs are able to handle a wide array of music genres. I listen to a whole heap of stuff and I didn’t find these headphones letting me down whether it was Wildhearts or Wu Tang, Bat for Lashes or Beastie Boys.

You get good and clear low ranges, midranges and trebles and, if you need it loud, these sound like they go up to 11. Even though they’re sitting on your ears they do cut out a fair bit of the outside world but you are still aware of what’s happening around you. This is a good thing for safety. You can save your noise-cancellers for home use or on long flights – give me some awareness when walking the streets please, everytime! There is also little leakage at reasonable volumes which will please your fellow travellers no end.

As well as being wireless the 830BT has another trick which the  450 can’t match out of the box. The K830BT is packing a microphone for hands-free chatting.

The mic is located at the bottom of the left can, near the microUSB recharging port. I tested the call quality out in the street and during chats over Skype and the people on the other end reported clear signals with the background noise being filtered and suppressed.

The outer half of the left earcup houses all the buttons you need to control the calling and music playback features.

So, there’s the pause/play button on top, forward and backward buttons on the right and left sides, and a two-directional buttons on the bottom of the circle for volume adjustments. There’s also a large multifunction button marked with a phone in the middle that lets you dial, accept, and end calls, and redial the last number with a series of simple clicks. It will even activate your iPhone’s Voice Control. This is also the go to button for turning the headset on and off.

I accidentally discovered that you can mute the microphone and lock the entire control pad through aimless fumbling. Once you become adept with these buttons then it all makes sense.

The main thing that caught me out, and this is one of my main grumbles to be honest, is that, to me, I found the volume toggles are the wrong way around. You see, the ‘volume down’ control sits in front of, instead of behind ‘volume up’ button. Perhaps it’s just me but this felt counter-intuitive for the first few days. Also, until I changed habits, when getting the headphones settled on my head I’d inadvertently pause the track.

AKG has successfully managed to put a lot of technology into the small ear pieces of these earpleasers which could point to poor battery life – this is not the case for the built-in cell on these cans.

You should get 8 hours of continual playback which, for me, equated to not having to show the K830BT the microUSB cable until way in to week 2.

You can hook the AKG K830BT headphones to most things thanks to the popular 2.1 +EDR standard, including A2DP, AVRCP, HSP and HFP profiles.

In short, you can use these with a wide range of phones including Apple devices. I used them with the HTC One X, iPhone 4, a Windows laptop and Apple MacBook.

AKG has created an accomplished Bluetooth headset with the K830BT. It is both light (145g) and comfortable to wear. These headphones are well put together but the choice of shiny black plastic, as opposed to the matte finish on the K450 makes them look a little bit cheaper somehow.

Sound quality is great and paired with the iPhone 4 and HTC One X they proved extremely capable – I’d dare to say that the sound was better from the HTC One X, but only marginally.

It took a few wears to get my head around the controls and not being tethered to the device I was getting my tunes from – once I did though, the 10 metres of freedom may be difficult to hand back.

I was gifted these headphones for the purposes of review by UK mobile phone retailer Phones 4U. All opinions made are 100% my own. I was unaware that I was getting to keep them but thought it only right to inform you.