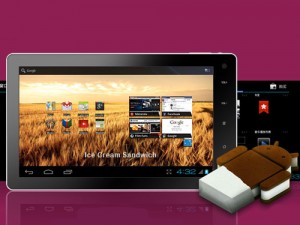 Google’s Ice Cream Sandwich (ICS) is the latest version of their Android operating system and is designed to play nice with phones and tablets – It’s great to see that the first Android Ice Cream Sandwich tablet costs less than £70 thanks to the NOVO7.

The NOVO7 claims to be the first ICS powered slate – the newest Android OS made its debut on the Samsung Galaxy Nexus smartphone last month.

So an Android tablet that costs a little over 50 notes packing the latest version of the Google software? Surely Apple should be worried?

The 1GHz MIPS tablet will be arriving with Ice Cream Sandwich OS as a world first – so says the maker, Ainovo. It even manages to undercut the budget Kindle Fire which is Amazon’s affordable portal to movies, music, TV shows and ebooks. As the Kindle Fire is only available in America the NOVO7 could well fill the gap.

The NOVO7 sports a 7-inch capacitive multi-touch screen that displays 1080p video and this Wi-Fi tab houses a 1GHz processor and 512MB RAM under the hood. It also packs 4GB of memory with a slot to increase this via MicroSD up to 32GB. The tablet is equipped with two cameras (2MP) and a battery life of 30 hours, according to the Ainovo website – which also says the tab even comes with Gameloft’s Spider-Man. Now then!

You can even order the China only slate from Ainovo but that will add £60 shipping fee to the £60 price – £120 will put you in Nook Colour terrirory but then you will have bragging rights to the first ICS Tablet. That’s if you’re brave enough to take on such an early release device…