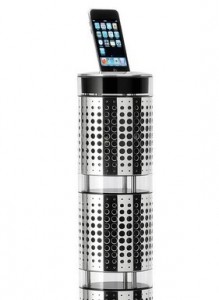 Jarre Technologies has officially launched AeroSystem One today at the IFA.

His love of merging sound and vision technology has been put to service the creation of a range of high-end, “affordable2 and aesthetic home-entertainment products.

AeroSystem is the audio range and the first release has been imaginatively dubbed AeroSystem One: an iPhone and iPod compatible, HD multi-directional sound tower equipped with a full spectrum speaker, delivering stereophonic sound
from a single multi-axial point.

AeroSystem One(r) is the result of four years research and development by Jean Michel Jarre and his team of sound engineers.

If you don’t own an Appley device you can also hook up any other smartphone, MP3 player (MP3, AAC, WMA, etc), laptop (integrated USB 2.0 port), CD / DVD and even your vinyl turn-table.

The man himself says that “With the progress of technology, the conditions of recording music in the studio have advanced considerably, whereas the means of listening in general have not ceased to regress: the vinyl has been replaced by the CD, largely inferior in quality, which has now given way to even more low-grade MP3 files.”

I do agree with JM with this statement:Â  Not that long ago, the Hi-Fi system was the centrepiece of our living-rooms, today we listen to music on small plastic speakers connected to our computers. As music has become nomadic, we have become less demanding of the quality of the listening devices.

Apparently AeroSystem One is Jarre’s ideal sound-system which is said to be able to retrieve and restore the lost sound that has been so meticulously produced in state-of-the-art recording studios.

Suggested retail price: 799 euros incl. VAT and is available from this month.