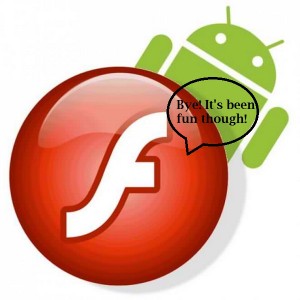 Adobe has just told developers that its Flash Player plugin is being killed off – this means that it’s the end for Flash Player appearing on your phones folks! You can just bet that a certain Steve Jobs is chuckling to himself somewhere in the big Apple Store in the Sky.

The news comes as Adobe has decided to focus using Flash AIR to create apps for Android Market and Apple’s App Store and pull the mobile Flash Player plug-in and concentrate on HTML5 for your phone-based cute cat video viewing requirements.

Flash Player was always the card of choice to be played by team Android/Adobe against Apple’s iOS but when the big players started to run their mobile videos using HTML 5 (Channel 4 brought 4oD to iOS a couple months ago for instance) the hand was gradually made to look weaker.

That, and the fact that Flash Player is a tad processor hungry. This means that if you’re rocking a top-level Android phone packing dual-cores then all is good; however, should you be messing with a budget droid handset then welcome to the world of lag. The whole point, I assumed, of Android was that the OS would work the same on each device – Flash Player proved this to be not so.

Those that laughed when the iPhone first appeared in 2007 sans Flash may also remember Jobs penning an open letter in April 2010 telling Adobe to switch focus to HTML5 with lines such as: “New open standards created in the mobile era, such as HTML5, will win on mobile devices (and PCs too). Perhaps Adobe should focus more on creating great HTML5 tools for the future, and less on criticising Apple for leaving the past behind.” – fast-forward 18 months later to now…

Adobe has been investing in HTML5 for quite some time I have to add. But, today, a line has been chalked under Flash Player for mobiles. This means that Windows Phone 7 users can bin any Flash Player plans and, as for Flash on Android and the BlackBerry PlayBook tablet – these will continue to be supported but expect only bug fixes, minor patches and security updates.

Android and iOS users rejoice and be happy – one love!