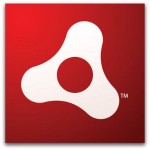 Adobe has just bounced out a brand spanking new version of Adobe AIR.

AIR 2.5 is not simply just aimed at desktops and mobiles but tablets and interactive TV as well.

Apparently AIR is designed to give apps closer access to the hardware than the company’s Flash.Â  AIR 2.5 has much love for accelerometers, GPS and all of those multi-touch gestures that most of the portable gadgetry out there employs.Â  Naturally video and audio inputs are still looked after in the usual way.

AIR 2.5 is certainly keeping as many bases covered as possible and will play nice with Linux, Windows, OS X, BlackBerry Tablet OS (the PlayBook runs a total AIR user interface), Android and iOS.

As well as all of those listed above Adobe has announced that AIR 2.5 will be used to create apps for Samsungâ€™s new SmartTV’s and other big names are looking to ship their devices packing AIR 2.5 by the end of this year – namely Acer, HTC and Motorola.