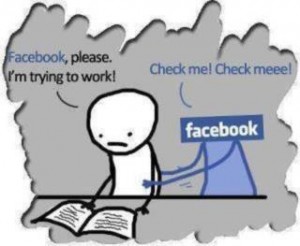 We all know how Social Networks can be a bit moreish and, sometimes, when you check the time you’ve lost four hours of your life. A few brain clever types have concocted a test to see if you’re addicted to the friend website with a blue-logo.

The test, which has been published in the Psychological Reports journal, is based on the ‘six core elements of addiction’ – salience, mood modification, withdrawal, tolerance, conflict and relapse – the same test used to spot alcohol addiction.

Internet addiction was actually proven in China a few years ago.

So, if you are able to close Facebook down for a few moments – ok, just minimise the window then…

The self-test is said to help users to be able to determine whether they’re hooked on the social network by rating each of the six questions (below) on a scale of 1 to 5, with one being the lowest and five the highest.

Like all self-tests this will only work with honesty 😉

*Scored 4 or more on at least four of these questions? Then you could (apparently) be addicted to Facebook.

The test was compiled in a study of 423 students from the University of Bergen, Norway, with the results suggesting younger users are more inclined to develop an addiction to the social network than older ones.

The study also found that women were more at risk than men, while those suffering from anxiety are more dependent on the website, simply because they find it easier to communicate behind a monitor and not in person, the study concluded.

The questions are similar to the ReStart test and sits well with the 12-step gamer addiction centre which opened in Somerset.

It adds to the findings of another survey – this time compiled using 1,000 students – by the University of Gothenburg, Sweden, which found that 85% of those questioned used Facebook daily, while half admitted that FB was the first hit of geekahol they had in the morning.

Is this a problem or is it just easier to ‘connect’ with people?

How did you score?

Let me know below or, heck why not, on Facebook 😀