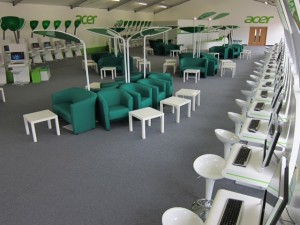 As the athletes’ villages open here in London, Acer is ready to provide a key service to the athletes in the shape of its internet lounges.

As athletes start to arrive in London and other Olympic venues across the country Acer is ensuring that they all have a means to contact home as well as keeping up-to-date with what’s happening in the world.

Located at Stratford, Weymouth and Egham athletes’ villages, the Acer Internet Lounges provide athletes with fully-equipped computing stations offering broadband Internet access, printer capabilities and social networking applications – all of which are available to them 24/7 during both Olympic and Paralympic Games.

The main lounge will be located at the Stratford Athletes Village and offer free access with 130 computers: 65 fixed stations powered by the Acer Z3801 all-in-one desktop and several portable devices: Acer S3 ultrabooks and Acer ICONIA A510 tablets (these will probably be the Olympic versions I’ve written about before).

Acer extended its service to the villages of Egham and Weymouth offering facilities equipped with 10 fully equipped computing stations.

Acer has aimed to make thier Internet Lounges welcoming and a comfortable environment where athletes can unwind and catch up with friends and family. Acer’s on-site staff and service technicians provide customer support and solve technical issues.

Acer is also offering a similar service for media types too!

Within the Main Press Center (MPC), located in the Olympic park, a lounge is equipped with 50 workstations.

The Internet Lounge opened on June 27th and will offer 24/7 operation during the Games.

The Main Press Center will no doubt be soon buzzing with journalists and members of the media broadcasting the extraordinary achievements of the athletes to every corner of the globe.

With the NFC paypoints, Samsung’s Olympian Galaxy S III, the specially developed Nike shoes for athletes with prosthetic legs, not to mention the TfL underground Tweeting updates – could this be the most Gadgety Olympics ever?