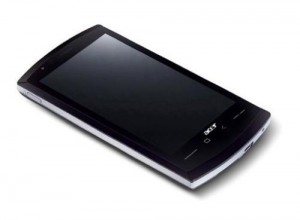 That’s what Acer is dubbing their new blower.

Today Acer unveiled their first step into the world of Android-powered smartphones – and it looks like the Acer Liquid A1 has shiny shoes.

So – how about that claim then?

The Liquid A1 apparently owes the “world’s first Android 1.6 high definition smartphone“ crown because of its large capacitive 800 x 480 res Wide VGA touch-screen coupled with the fact that it has been timed (on purpose I’m sure) to be sporting the very latest public Android build.

The shiny handset seems to be wearing a business suit as well as those shiny shoes but it sounds like Acer has its eye on the regular user as well because Acer will be offering the Liquid in sporty red and chic white, as well as the more trad glossy black.

Round the back you’ll find a 5 megapixel camera for those that like to show-off such things.

The Liquid A1 will come with a custom user interface purring over the relatively bullet-proof Android.

There’s also something Acer calls “Spinlets” – an app that lets you stream and share media with friends.

Release dates, prices and such should be out soon – I’ll letcha know 🙂