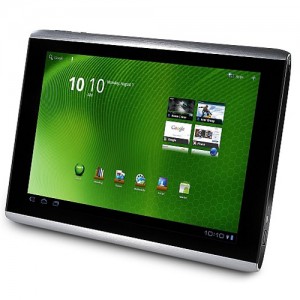 We’ve had the run of dual-core processor packing trendiness and now it looks like 2012 will see an abundance of quad-core lovelies – there’s already rumours of a HTC phone being quad-powered but tablets are going to be the hottest property for sure, and Acer have a beauty!

The Acer Iconia A701 is set to bug the heck out of the sweet Asus Transformer Prime looking at the details spotted amongst the Acer website’s XML profile.

The Acer Iconia A700 and A701 (the 701 has 3G and the 700 is Wi-Fi only) will be equipped with the potent Nvidia Tegra 3 CPU. The quad-core chip squirts everything around thrice quicker that the dual-core Tegra 2 whilst, at the same time, manages 61% better battery efficiency. Now, that’s just showing off really isn’t it?

Let’s just assume that the tablet will have the standard 10.1-inch display – that means, for you pixel density fans, you’d be getting 224 ppi. That’s what you get on Sammy’s Galaxy S 2 which everyone loves – also there is no other tablet that can match that at the moment!