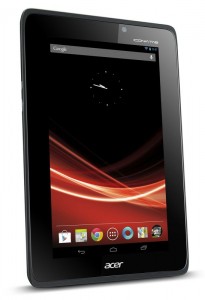 I’ve just spent a week with the Acer Iconia Tab A110. Is this latest in a line of 7-inch Android tablets good enough to tempt or will it just be another ‘also ran’?

The Acer Iconia Tab A110 has gone up for pre-order in the UK and it’s sub-£200 price tag already got mr interested but has it got the chops to make this self-confessed tablet-sceptic see the point in having a Wi-Fi only slate?

An Android tablet with a 7-inch screen – we’ve heard it all before right?

The good news is that the Iconia Tab A110 lands filled with beans, Jelly Beans to be precise.

So a 7-inch, 8GB tablet, running Android 4.1 Jelly Bean, which can be preordered now for just £179? It’s suddenly sounding better isn’t it?

The Iconia Tab A110 is also packing a quad-core Tegra 3 processor with a clever fifth battery-saver core for a longer battery life. The Tegra 3 processor uses this low-power core to handle your everyday apps, and then kicks into full quad-core mode for demanding apps like video editing and gaming. This means you can squeeze 7.5hrs of video watching (240hrs stand by) out of the little thing.

You also get 1GB of RAM and a mini HDMI-out so you can hook the Iconia Tab’s 1024×600 resolution display to your big screen.

I loaded it with some tunes and a couple of films which all played faultlessly. Don’t worry about filling up that 8GB with media and apps from the Play Store – the Tab A110 is equipped with a MicroSD slot so just whack in a card to expand its storage up to 32GB. Something you can’t do with the much lauded Google Nexus 7 and a 32GB Kindle Fire HD 7″

Weighing in at less than 390g I was happy to have this natty device slipped away in my courier bag. Having films and TV programmes to hand on a decent screen whilst traversing the capital by rail and road has been most enjoyable. As was reading eBooks, for that matter. I don’t think I can ever read another thing on my iPhone – not for a while, at least.

My AKG K830BT Bluetooth headphones paired up swiftly with the Tab A110, so wirelessly listening to the dialogue on Iron Sky or the musical happenings of SUBSET was truly a joy.

You get a front facing camera which can record HD video @ 30 fps and, thanks to having Android 4.1.1 power the Tab, you get some handy photo-editing toys for free. That also means that you get Face Unlock – once set up the Acer Iconia Tab A110 will only unlock for your pretty face.

The USB port and Jelly Bean will support a USB Keyboard, mouse and gamepad and being Android it’s preloaded with a full set of Google Mobile Services: Gmail, Google+, Maps, Messenger, Play Store, Talk, YouTube and the fabby Google Currents.

OK – so this has been a whirlwind review and I only had this preview device for a few days use but I have to say it has got me thinking.

It has been handy to have around and I soon found myself with the A110 next to me on the sofa, in my bag and even sitting on my desk – it became my flat friend.

True, Google’s Nexus 7 costs £159 which makes the Acer £20 more – but you’ll be stuck with 8GB of storage on-board the Nexus 7 and can go up to 32GB with the Acer, undercutting the Kindle Fire HD by20 notes.

Is this the first tablet that has made me see a reason for owning one? Yes.