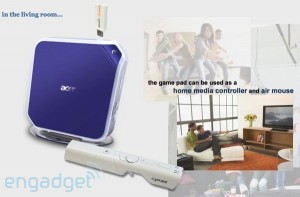 Engadget have received a bundle of information about that Acer Hornet which I mentioned on the old site a while ago.

The Atom powered Nettop HTPC (Home Theatre PC)Â is well priced and not badly spec’d if all this is true and not some cruel April Fools prank – but the bundle that the Engadgeteers received included a 20 page book.

The Acer Hornet features 1080p video output via HDMI and is based on NVIDIA’s Ion platform.

There would be three Acer Hornet models with the top one featuring 2GB RAM, 160GB HDD, Wi-Fi, and Wiimote style controller.

Digitimes reports that Acer will announced the Hornet in Beijing, China on April 8thÂ for a sub $299 price.

Let’s hope that this is all true 🙂