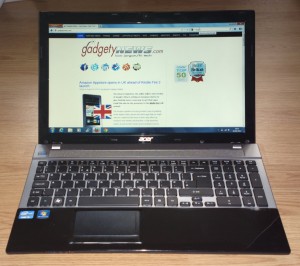 Well, I’ve spent a while with the new Acer Aspire V3 in its Core i5 guise. Is it a jack of all trades, or a master of none?

When I unwrapped the Acer Aspire V3 it certainly didn’t look like a laptop you’d normally see hanging around the £450 mark. In fact, when I posted a quick snap up on the GN Facebook page and when I unfurled it at the day job people likened its looks to a MacBook. Granted, it is probably down to how the keyboard looks, but hey, show me a MacBook under £500!

The Aspire V3 looks nice enough. The black plastic chassis has a slightly sparkly finish to it and it’s matched with the silvery keyboard area. All of this makes a decent job of making the V3 look classy whilst obviously keeping the cost down.

The build is solid and there’s no real flex on the lid or chassis. It took me a while to settle in with the low-travel keys on the board but, after a few tweets and FB updates I found the keyboard pretty responsive. It wasn’t long before I was typing like it was my laptop.

It’s not too weighty either, and at 2.5kg it’s light enough to carry when needed. I wouldn’t class it as being highly portable but carting it from meeting to meeting or around to a friend’s place wont put your back out – I would not recommend carrying it around a trade show all day though.

An NVIDIA GeForce GT 630M mated with a 2nd Gen Intel Core i5 provides enough grunt to be able to handle most things – even a spot of mild gaming.

That 2nd Gen Intel Core i5-2450M (2.5GHz) can hit up to 3.1GHz using Turbo Boost 2.0 Technology when you test the V3 with a particularly demanding program.

This version of the Aspire V3 is equipped with 4GB of RAM which is enough to run several programs at once without any hassle. It will cope with most image and video editing tasks if you’re into that kind of thing.

All of that is some pretty neat kit for a laptop at this price point and you’ll soon forget that you’re using a sub £500 machine.

One giveaway to its price, however, is its 750GB hard disk drive. Ok, it does provide ample storage space but you might get a touch of the green-eyed monster if your friends are rocking SSD-endowed lappies.

The gloss screen provides better colour richness when compared to a matte screen, but that has been done with the trade-off of having quite a lot of reflectiveness. Working outdoors in the bouts of sunshine we have been enjoying becomes painful and working indoors takes some careful positioning so as not to get glare on the screen.

Acer has also pumped up the contrast so you do get decent depth of colour and vibrancy which, again is great for movie watching. Viewing angles are pretty darned good too (once you’ve taken any light sources in to consideration).

Battery life was distinctly average and our stress tests killed the V3 in three and a half hours of looping high-definition video. This is a solid performance, and you could watch a movie on the go, or get more than four hours of ‘normal’ web surfing without using the charger.

Acer have worked hard to balance a lot of compromises in order to package this laptop at this price point.

The V3 is able to support up to four USB 3.0 ports but Acer has furnished it with one and a pair of USB 2.0 ports. Granted, not everyone is kitted out with USB 3.0, so that makes sense.

Fitting a regular hard drive into a new laptop which lands amongst the throng of SSD-equipped Ultrabooks is also something you may or may not notice depending on your demands.

The average battery capacity and the attractive but basic plastic chassis will, no doubt, be scored mid-table.

The display is better than some in the price-range but will not make it stand out from the masses.

Saying all of that though, the Aspire V3 is great to use. The keyboard is one of the best I’ve used in the price range and, talking about price, a quad core i5 processor and a NVIDIA GeForce GT 630M in a £450 laptop? That sounds like a bargain to me.

You might want to spend more to get a laptop with a better display and a sexier chassis and power to you, I say.

If you have a budget and want something that will blaze through Office tasks, encode videos, cope with some image manipulation and even play games – then the Acer Aspire V3 can do it and hand you back some change.

All-in-all the Acer Aspire V3-571 is an excellent family all-rounder, which balances great performance and decent build quality with a pocket pleasing price.