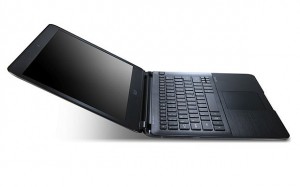 And so it begins – CES has kicked off and Acer is the first to introduce the ‘thinnest Ultrabook’ as well as a high-definition Iconia Tab tablet.

CES being what CES is I can’t vouch for how long Acer will be able to maintain the kudos of having the thinnest Ultrabook there but, for now, they are crowned with the skinny title. As well as the new Ultrabook they quickly flashed their latest Iconia tablet which was confirmed to be packing a 1920×1200 resolution display – which is pretty spanky and no mistake!

The ultra-slim stats on the stand belongs to the 13.3-inch Acer Aspire S5 Ultrabook which measures a svelte 15 millimeters thin and will run for 8 hours on a fully charged battery. The Aspire is also equipped with HDMI, USB3 and Thunderbolt ports. All of these the ports are accessed via a panel built into the laptop’s hinge similar to the original MacBook Air.

The much anticipated Iconia A700 Tab is the first tablet to feature a quad-core processor and a full-HD 1080p display. The 10.1-inch device will also feature a micro USB and microSD memory card slot.

The company also announced a new cloud storage service named AcerCloud to sync data across computers and devices, and it won’t necessarily be limited to Acer products. Use AcerCloud to sync photos, music, and documents across devices. The service will be open to PC and Android devices on the whole, and will use the company’s Clear.fi branding for its syncing apps. Acer says it will include the service on all of its consumer PCs starting in the second quarter of this year.