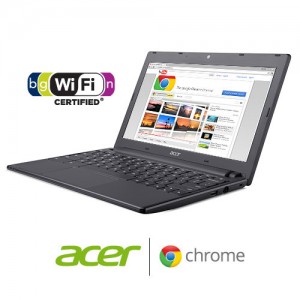 Acer has now officially unveiled more details of their AC700 Google Chromebook which they hope will give Samsungâ€™s Series 5, which had its European release on June 22nd, a run for its money!

The Acer AC700 uses the cloud-based Chrome OS for all of its application duties. Hardware-wise the Acer Chromebook packs an 11.6-inch CineCrystal HD LCD screen where Sammy’s Series 5 struts around with 12.1-inches of WXGA. But size aint everything right?

The Acer AC700 will land as a Wi-Fi only device with a 3G capable model arriving later in the year.

Under the hood it’s all much of a muchness. Both the Acer and Samsung Chromebooks are powered by an Intel Atom N570 dual-core processor matched with 2GB of DDR3 memory, and a 16GB SSD alongside a 1.3-megapixel HD webcam, 4-in-1 card reader and a a variety of USB and HDMI ports.

Where a UK release day is yet to be announced I’d suspect the pricing could be the usual ‘replace the $ with a Â£’ rather than any kind of currency conversion.

Are you up for a Chromebook? I think that if the UK were more hooked up with reliable hotspots then they could be more of an attractive proposition. Let’s face it – no interwebs = no puter; not even a spot of word processing or a swift game of patience.