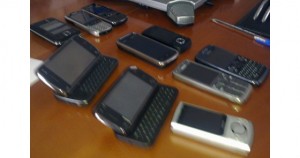 Are you in love with Nokia phones?

Well, here’s something to help you with your Christmas wish list!

A stack of new Noks have appeared in a spy shot stylee – there’s a couple of ‘already knowns’ but quite a number of brand-news!

To start of with there’s the Nokia N97 Mini as well as the 5900 XpressMusic which has graced many a webpage since last week.

Unwired View go on to point out other new Finnish blowers such as a new looking N series slider and a random white phone that appears to be sporting a click wheel.

The photo was poached from Flickr after an unnamed shop posted it up.

No doubt all will be revealed at the Nokia World show in lovely Stuttgart on 2 September.