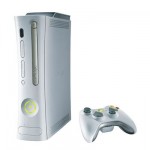 Microsoft have announcedÂ the release of the 60GB XboxÂ trippling the Xboxâ€™s usual 20GB drive while keeping the same Â£200 price tag! 🙂

The new model will be available from 15 AugustÂ (Friday) and will replace all existing 20GB models.

Of course, thereâ€™s still the option of the Xbox Arcade, which lacks a hard drive, but packs a 256MB memory unit to store downloaded games and gamer profiles.

For those that haven’t met the crunch yet there’s still the Xbox Elite in its lovely blackness andÂ strutting around with aÂ 120GB hard drive and weighs in at Â£260.