4K Ultra HD laptops to be available later this year 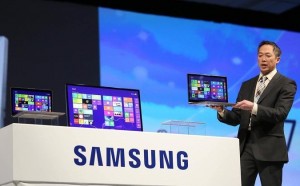 You will no doubt be aware that the latest in televisual gadgety loveliness is ultra HD or 4K TVs such as Toshiba’s 84-inch 4K set or the slightly more affordable 50-inch unit from SEIKI. Hot on the heels of these huge tellys are the Ultra HD laptops which, according to reports, will be arriving later in 2013.

According to the usual shadowy “industry sources,” word is that both Innolux Corporation and Samsung Display are working on Ultra HD monitor screens for release later in the year.

With Toshiba reportedly working on a 4K laptop for release in 2013, it’s looking increasingly likely that the next generation of screens will be arriving sooner rather than later.

This might prove to be a slight worry for Apple as these next gen peeper pleasers will leave the MacBook Pro’s Retina display looking a bit shoddy.

I wouldn’t expect these high definition laptops to be cheap – thankfully, Sony has started to cater for the more cash-strapped of us out there.