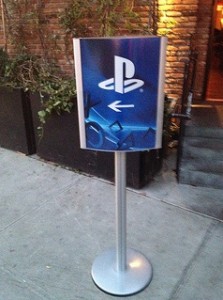 If you weren’t able to pre-order the next gen Sony game console then you have 444 extra chances if you are in New York on November 15th.

Sony have announced that they will make 444 PlayStation 4s available to New Yorkers at a special midnight launch.

The consoles will be available at The Standard, High Line hotel in NYC at midnight on November 15th.

To coincide with this The Standard will also host a launch event featuring 30 PlayStation 4 consoles and an interactive lighting installation that will dominate the east and north facades of the hotel.

Also at the event will be “surprise ad-hoc PS4 games,” which will offer attendees the chance to meet and play with the developers and producers of the games.

The central plaza of the venue will showcase “interactive content and real-time art jams,” which will lead to the live broadcast of the first PS4 being sold on Spike TV.

The queue for the extra PlayStation 4s has already begun at Washington and Little West 12th.

Sony says there’s no cash allowed, probably as this is just set up in a hotel, so all purchases must be made with credit cards.

You up for it?