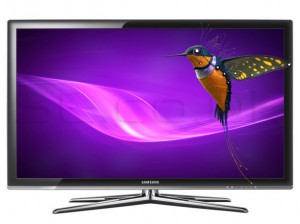 The first 3D tv’s to be sold in the UK have his John Lewis’ flagship stores!

From this very day you can nip into one of those stores and come away with the flashy Samsung UE40 C7000 3D gogglebox.

This multidimensional 40 incher will cost you Â£1800…. and the rest!

The C7000 uses the active 3D system – that’s the one that uses special glasses which receives signals from the telly and alternates the ‘shutters’ as it goes. The passive system, as used by Sky, just needs some cheapo specs.

A couple pairs of the Sammy sunnies will hit your wallet to the tune of Â£149.

If you’re wanting all that 3Dness you’ll need a Blu-Ray player and some 3D films – fortunately John Lewis are chucking in the specs with Monsters Vs Aliens 3D unless you want to wait patiently til June when Skyâ€™s 3D service kicks off.