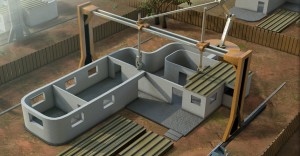 I am guessing that most of you readers of GadgetyNews are aware of 3D printing. This process has already made huge leaps in advancement. I didn’t, however, realise that it’s possible to print a full-sized house.

I have seen videos of a 1.2 meter wrench being printed, as well as guns, which is pretty impressive – but a house?

If you watch the video below you can see that an entire 2,500 sqft house can be 3D printed in a mere 20 hours.

With 3D printing, the process uses CAD/CAM (computer-aided design / computer-aided manufacturing) where 3D models are designed on a computer and then manufactured using CNC Machines or 3D printers.

The design is then manufactured into a physical object automatically, with instruction from the 3D computer model to physical object without the need for a person to get involved.

Automated construction basically scales up that process. The size of the 3D printer is large enough to construct walls by depositing concrete based material layer upon layer to build a wall.

I’m guessing that this machine can’t be bought on the high street though.

In the video, you can see a prototype of a machine being used for ‘Contour Crafting’.

ContourCrafting.org describes this process as:

Contour Crafting (CC) is a layered fabrication technology developed by Dr. Behrokh Khoshnevis of the University of Southern California. Contour Crafting technology has great potential for automating the construction of whole structures as well as sub-components. Using this process, a single house or a colony of houses, each with possibly a different design, may be automatically constructed in a single run, embedded in each house all the conduits for electrical, plumbing and air-conditioning.

They see the potential applications of this technology in areas such as emergency, low-income, and commercial housing.

More excitingly this same process could be used to build habitats on other planets.

Contour Crafting will most probably be one of the very few feasible approaches for building structures on other planets, such as the Moon and Mars, which are being targeted for human colonization before the end of the new century.

Check out the video.