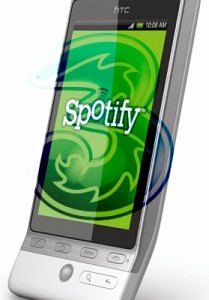 It’s an exciting day for 3 as it’s launching the network’s first Android phone.

The familiar face of the HTC Hero will be seen in 3 stores from November, and comes with the added bonus of a free Spotify Premium account.

The Hero will cost you 100 notes up front and then monthly payments of Â£35 for the following 24 months.

That package gets you 750 free minutes, unlimited texts, unlimited Web browsing, and unlimited calls to other 3 mobiles.

As well as all that you get free Skype and tune listening via Spotify as I’ve already mentioned.

Ok – so you can get Spotify on any Android phone (or iPhone for that matter) with the mobile app, but this is the first time Spotify Premium has been bundled into a phone deal.

Apparently that means that over those two years you’ll save Â£240 on music streaming and offline caching.

It seems pretty tempting but 2 years being tied into anything involving new tech seems silly – personally; keeping the same phone for 12 months was bad enough and then the 18 month contract came in when I got the 3Gesus phone……. I’ve been jonesing for the 3Gs since it dropped and I still have a coupla months to go!

What do you think? Is 2 years daft?