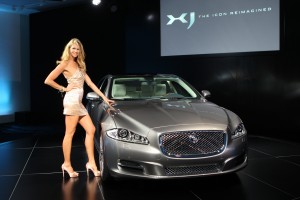 You may be aware that the classically gorgeous brand that is Jaguar has recently released it’s new XF line – this actually happened on Thursday but I’ve been busy with Subset.

When the first customers took delivery of their XFs in March of 2008, they became the owner of a Jaguar that fuses sports car styling and performance with the refinement, features and space of a premium luxury saloon.

“With the new XF we set out to design, develop and build the definitive Jaguar sports saloon. Now with magnificent new petrol and diesel engines, representing the very latest in advanced power and technology, the 2010 Model Year XF is even more thrilling to drive.â€ –   Mike Oâ€™Driscoll, Managing Director, Jaguar Cars

Now Jaguar has moved the game on again. The highlights of the new 2010 model year XF, (available to customers from March 2009, dependent on model and market) are a new flagship â€“ the stunning, supercharged XFR â€“ two all-new V8 petrol engines, new V6 diesel engines and significant trim and specification changes. The new engines are the most advanced and most efficient that Jaguar has ever produced.

The new XFR is the first XF to carry the â€˜Râ€™ badge, which defines Jaguarâ€™s most performance-focused models:
–         Powered by a supercharged 5.0-litre engine â€“ the AJ-V8 Gen III R â€“ developing 510PS and 625Nm of torque
–         Compared to its supercharged 4.2-litre V8 predecessor, power has increased by 23 percent and torque has increased by 12 percent.
– The new direct-injection engine gives the XFR a 0-60mph time of only 4.7 seconds (0-100kph in 4.9 seconds). More relevant in everyday driving, an excellent indicator of the XFRâ€™s great flexibility is the time it takes to accelerate from 50-70mph â€“ just 1.9 seconds
–         This level of performance is achieved with comparable fuel economy and better emissions than the previous 4.2-litre engine.
–         The new engine also meets EU Stage 5 and US ULEV II/Tier 2 Bin 5 emissions regulations.

The new XFR and high-performance XF diesels demonstrate Jaguarâ€™s commitment to delivering exhilarating performance and outstanding dynamics for the driving enthusiast â€“ the â€˜Fastâ€™ part of the Jaguar ethos of designing, engineering and manufacturing â€˜Beautiful, Fast Carsâ€™. Jaguar Design Director Ian Callum and his team have also worked to finesse the â€˜Beautifulâ€™ in Jaguarâ€™s appeal.

â€œEvery XF is distinguished by its dramatic styling, flowing lines and coupe-like appearance but the new XFR is the ultimate sporting execution of that design language. It has superb proportions, better than any of its rivals, with a wide track and confident stance.â€  –  Ian Callum, Director of Design, Jaguar Cars

The new XF is already acclaimed as a key element in the revitalisation of the Jaguar brand, but now the car that newly defines Jaguar sporting luxury is even better, with major powertrain changes and a wider range of models â€“ including a stunning new, supercharged XFR and a high-performance, high-efficiency diesel.

The 2010 Model Year XF â€“ available to order from January 2009 â€“ features all-new 5.0-litre direct-injection V8 petrol engines and a new 3.0-litre V6 twin-turbo diesel with a choice of two power outputs. There are also significant trim and specification changes â€“ including many new features unique to the new XFR â€“ and the introduction of new Portfolio derivatives.

The new XFR features Active Differential Control and Adaptive Dynamics â€“ technologies being introduced for the first time on this and the XKR sports car. The electronically controlled differential and suspension system work together to optimise traction under acceleration and cornering â€“ highly appropriate for a car that offers an electronically limited top speed of 155mph and reaches 60mph from standstill in just 4.7 seconds. The XFR also adds a faster steering ratio and uses the XFâ€™s largest ventilated disc brakes â€“ although every version of the XF with the new, more powerful engines features uprated braking specification.

It’s the powertrain that generally gets people a little hot under the collar so what’s the new pussycat got?

Well, oddly, there seems to be no small-capacity tax-saving diesel engines which is a bit odd in these eco-friendly and credit-crunching times.

The result in the new XFR is a 0-60mph sprint time of just 4.7 seconds (0-100kph in 4.9 seconds). More relevant in everyday driving, an excellent indicator of XFRâ€™s great flexibility is the time it takes to accelerate from 50-70mph â€“ just 1.9 seconds.

The XF is a car packed with user-friendly technologies. Features that distinguish it include full shift-by-wire transmission controlled by the JaguarDrive Selectorâ„¢; cruise control with Automatic Speed Limiter; an optional radar-based Blind Spot Monitor that warns the driver when there is another vehicle nearby in a different lane; and XFâ€™s optional Rear Camera Parking Aid, which provides a clear view of the area behind the car on the colour Touch-screen while reversing. This is now upgraded with on-screen guidance lines that move according to steering wheel angle to indicate the area into which the car will reverse.

A significant number of other enhancements have been made above and beyond the impressive features in the 2008 XF:
–         A new navigation system which includes turn-by-turn instructions in the message centre, clearly indicating the route with a combination of junction icon, distance countdown details, and the street or road name.
–         For diesel models, Jaguarâ€™s new diesel mis-fuelling prevention device is fitted as standard.
–         An Acoustic Laminated Windscreen is fitted as standard on every XF.
–         Multi-way adjustable power seats are standard on all models, with the option of ventilated heated and cooled seats and heated steering wheel.

The XFâ€™s impressive audio range is topped by an exclusive optional sound system, the Bowers & Wilkins 440W system with DolbyÂ® ProLogicÂ® II surround sound and no fewer than 14 speakers. And the XFâ€™s Portable Audio Interface allows simple, direct connection of iPodÂ® and MP3 players with full control via the Touch-screen or steering wheel controls.

Sound quality is a key characteristic of all Jaguars and is one particular aspect that customers relish. With that in mind, Jaguar engineers have deliberately accentuated the acoustic feedback into the cabin in order to further increase driving pleasure.

The XFR has received special attention to deliver the required V8 intake sound character commonly absent on supercharged engines. Intake manifold pressure pulsations are fed into an acoustic filter at the rear of the engine that is tuned to â€œtenor Câ€, with the output from the filter ducted into the cabin. The filter is controlled by the engine management system which allows the acoustics to enter the cabin only under certain conditions, such as when the engine is accelerating hard, thus maintaining the desired sound quality at all times.

A key feature of the new engine is the unique, parallel sequential turbocharger system, the first of its type to be fitted to a V-engine anywhere in the world. Delivering high torque throughout the entire engine rev range, improved throttle response and low CO2emissions, the twin-turbochargers work sequentially to deliver unrivalled response and best-in-class torque at low engine speeds, while packing a huge punch at higher engine speeds.

For most day-to-day driving, including motorway cruising, a responsive, variable-geometry primary turbocharger does all the work while the smaller, fixed-geometry, secondary turbo is dormant, saving energy and improving efficiency. When the engine revs climb above 2800rpm, the secondary turbo is brought on line within 300 milliseconds, smoothly and seamlessly boosting the engine output with no discernible turbo-lag or power-step.

Some twin-turbo systems rely on a smaller turbo for primary use, only using a larger turbo when higher power is required. Though effective, this has the disadvantage of raised exhaust pressure and increased pumping losses. The system in the new XF uses a larger, variable-geometry turbocharger more of the time, which not only reduces pumping losses, but also improves fuel consumption and CO2 emissions. Jaguar engineers have particularly focussed on the issue of turbocharger â€˜lagâ€™ at low engine speeds. The new AJ-V6D Gen III 3.0-litre diesel significantly out-performs its rivals in this respect by delivering 500Nm of torque in only 500 milliseconds from idle.

So more than ever, the new XF, XF Portfolio and XFR challenge the rules, delivering that unique Jaguar personality summed up in the two words: â€˜Sporting Luxuryâ€™. The new XF range offers a superb blend of performance, value and contemporary desirability, all of which means that Jaguarâ€™s acclaimed XF has now moved even further ahead in the sports saloon market.