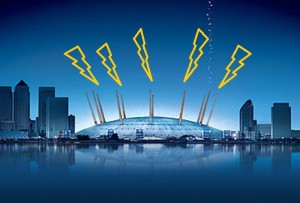 Remember that 4G trial in Slough being conducted by O2?

Well the UK network provider have empowered a half dozen mobile phone masts to take the mighty LTE signals.

The LTE, or Long Term Evolution, signals are willing to transport your web browsing data at high speeds when you’re away from a Wi-Fi signal. This means no waiting around for those who have 4G-equipped mobiles, tablets or laptops.

O2 in a bit of a braggy mood boast that those six masts being used in the trial can actually handle the same volume of traffic as O2’s entire 3G network. OooOoOoooo…. get you O2! :p

Is it any good though? How does a theoretical bump of 10x faster network speeds compared to the existing 3G suit you?

Apparently this is achieved because 4G “entirely centred around data, with voice effectively an added bolt on”.

LTE is up there with WiMAX as contenders to nudge 3G off to the network signal retirement village.

Before you techie types start pulling me up on the fact – WiMax and LTE aren’t really, truly 4G – but they are speedier than 3G and many phone companies are sticking with the 4G name as it makes sense to the likes of me who are easily confused. You see, The International Telecommunication Union Radiocommunication Sector (ITU-R) has ruled that neither are sufficiently faster than 3G and therefore unworthy of going up one digit. So no going up to 11 for these two just yet.

If you want that official 4G sticker on your signal then your network’s data rates must hit 100Mbps for high-mobility access like surfing the Web while on the move, and 1Gbps for low mobility like local wireless access. There you have it.

Whilst O2 is in glorious Slough, Alcatel and Arqiva are playing with LTE in Wales.

This is all good for the hopes that the UK could go all 4G (or not real 4G – but who cares?) from next year when Ofcom auctions of slabs of speedy the spectrum to the highest bidders.

I’m still looking forward to the O2 boost to hit London when the capital gets its 900Mhz 3G network.

Eventually we could see some of those tasty America-only 4G handsets coming over to the old country.