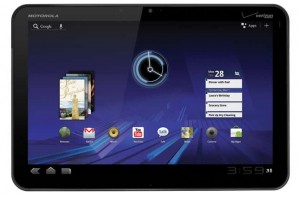 Good news if you like the look of the lovely Motorola XOOM as it has been reported that Moto is cobbling 800,000 of its debut tablet ahead of launch.

XOOM is expected to hit stores worldwide in March and the target being fixed is said to be 1 million unit sales by the mid point of 2011!

Motorola’s first tablet will also be the first tablet on sale packing Googleâ€™s Android 3.0, Honeycomb operating system.Â  So a double hit for early adopters then 😉

Now, there has been rumours that the XOOM’s asking price will be around Â£700. This has obviously not been confirmed and is probably no more than a tech retailer slinging up a random pre-order price to drive outraged traffic to their site.

If you recall the Galaxy Tab started at a silly price and now is available for around Â£400 – or Â£99 on a subsidised tariff. I’m sure that the marketing bods at Moto know that they have to be at least in the ball park of the current king – entry level iPads are going for around Â£439.

The XOOM is packing though – Under the hood is a 1GHz Nvidia Tegra 2 dual-core processor, 10.1-inch 1280 x 800p display, cameras front and rear with 720p HD video recording capabilities and 32GB of internal storage.

I’m still tempted but will need to see a REAL price – anyone got any details?